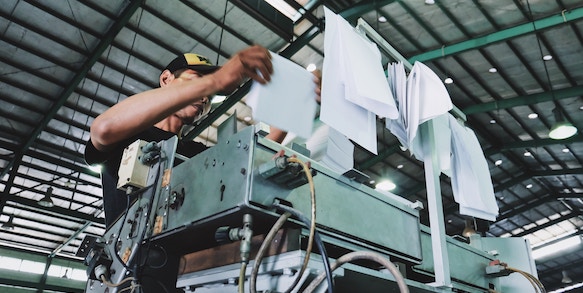 You often hear people talk about print on demand (POD) as something equivalent to digital printing, or that they’re planning a small POD edition. You may even come across a book with the same three letters printed on the cover. These are trends that speak of a general confusion around the term, which is why we’ve created this list to break down a few common misconceptions.

Okay, so this is what you need to know before we dive into the technical stuff: the choice of printing technique is usually based on run lengths. Shorter print runs go digital, all others go offset and are produced in advance. Longer print runs mean that unit costs decline, whereas POD has a fixed cost per copy regardless of the number of copies you order.

This might make print on demand look like a very pricey option at first sight, and strictly speaking, that is correct. But if we can all agree that POD is a workflow, not a printing technique, we can start to pick apart a few common misconceptions associated with this particular term.

Misconception #1: POD is the same thing as digital printing

The former is a workflow, the latter a printing technique. Having that said, it's not very surprising that most people lump them together. It's of course true that digital printing is used in the POD workflow, but only because it is the cheapest and most widely used technique when producing books one-by-one. If a more profitable alternative presented itself, it would probably dominate the market. In any case the concept of POD remains the same; sell the book first, produce it afterwards.

Misconception #2: POD can be used to print an edition

Since we've established that POD means printing books after they've been ordered, it can’t be equivalent to that of printing an edition (which means printing books in advance). A print book has either been produced through the POD workflow or a long print run offset, never both. They are mutually exclusive. It is true that you can go digital or use a POD service to print a small number of books, but it's not the same thing as producing books on an as-needed basis.

Misconception #3: POD is a book format

If you talk about POD as a type of format, chances are you’ll start to treat it as such when drawing up contracts with authors and other rights-holders. POD should not be used in this context since all formats; hardbounds, softcovers and paperbacks, can be produced through the POD workflow.

This informal use of the term is usually caught on in external communication: in marketing campaigns and sales forecasting. Publishers speak of POD as something that succeeds a hardbound or a paperback edition; and this line of reasoning implies that there are three formats that take place in a book's life cycle. This isn’t a false assumption per se, since the book hits the POD workflow when demand is low and you want to minimize risk (the so-called long tail effect), but it's still mixing apples and oranges.

Misconception #4: POD is something customers want to know about

Pricing and availability is interesting from a customer point-of-view. Workflows? Not so much. Customers don’t care about business models or printing techniques – if the book was produced after it was sold. They want to know release dates or if you're planning a paperback edition, because that says something about when they can expect to get ahold of a copy and how much they're going to spend on it.

POD is a trade term that shouldn’t be used in communication with potential customers. That's why it is important to separate POD from formats, in both internal and external communication.

Keeping books in stock is expensive, which is why you will have trouble finding backlist titles in stores. The expenses of production, distribution and storaging are too great in relation to what income they might generate over time. Printing books on demand solves this issue since all overhead is covered by the customer. It's only natural that this business model is more expensive when demand is high since cost per unit doesn't decline (like with longer print runs), and a lot cheaper when demand is low. If expenses were high when demand is low as well, this business model wouldn’t be of much use.

The most important question you should ask is: how great is the demand? Apply the most convenient business model thereafter. Just remember to stay flexible if demand would skydive, or better yet, skyrocket!